There was a time that it seemed like Singapore Airlines thought the more brands it had, the better off it would be. But after amassing quite the collection, the airline is finally starting to rationalize things down to a more sensible level. The latest move, getting rid of the SilkAir brand and folding it into Singapore Airlines, is something that probably should have happened long ago.

Since it became an airline 45 years ago, Singapore Airlines has built itself into quite the premium brand. Even with only a handful of flights into the US, Singapore is well-known as an airline you want to fly if you ever get the chance. That all-important image is something Singapore wanted to protect, so any time it came up with something that didn’t fit the mold, it used another brand.

SilkAir started in the late 1980s as a holiday/charter type of offering, but by the early 1990s it had morphed into a regional airline serving destinations around Southeast Asia. It took its present name in 1992. This kind of airline doesn’t really exist in the US. It would be as if United used its name only to fly widebodies over the ocean while leaving the domestic narrowbodies to, uh, Continental, or something like that. SilkAir is still wholly-owned by Singapore, but it is a separate brand and airline. SilkAir has moved away from its leisure roots over the years and grew into a regional full-service airline. It still only flies narrowbody aircraft, but its route network has been stretched as aircraft range has increased.

In the early 2000s, Singapore thought it would be a good idea to get into the low cost carrier game. So it started Tiger Airways with a 49 percent share. (Another 11 percent was owned by the state-owned holding company that also owns Singapore.) Tiger grew rapidly with its fleet of narrowbodies and even went into the Australian market. That was later spun off.

But why have one low cost carrier when you can have two? Back in 2011, Singapore decided it wanted to play in the long-haul, low-cost world so it created the annoyingly-named Scoot to start flying cast-off 777s from the parent company. Those would be replaced by 787s over time. Scoot pushed into Australia first, but it also went into China, India, the Middle East, and it even touches the US with a flight to Honolulu via Osaka/Kansai.

But wait, there’s more. Singapore wanted to expand Scoot into other countries so it created the franken-baby NokScoot as a partnership with Nok Air, a poorly-performing Thai low cost carrier that has become increasingly independent as Thai Airways has distanced itself.

This doesn’t include other airlines in which Singapore has invested. There was the ill-fated ownership stake in Virgin Atlantic that Delta bought. Oh, and there’s the nearly-20 percent interest in Virgin Australia. But forget about those, and let’s just talk about the brands that Singapore controls.

In 2014, Singapore started making a move to purchase more and more of Tiger until it had acquired it completely. With both Tiger and Scoot having similar target markets, Singapore decided there was no reason to keep two brands. It retired the Tiger name and put everything under Scoot. NokScoot still exists, but everything else low-cost is just Scoot.

On the upper end, Singapore still had to decide what to do with SilkAir. Over at Cathay Pacific, a similar structure existed with Dragonair doing duty as the regional operator. But a couple years back, the airline was renamed Cathay Dragon with branding only differentiated from the long-haul flagship by a color change. Singapore has opted to go one step further. SilkAir is going away… eventually.

It seems that the biggest thing holding back the merger is the onboard product. SilkAir’s premium cabin today is a recliner-style seat that, while better than a normal US domestic first class, is still far below what Singapore offers in it premium cabins. To me, this isn’t an issue. Singapore now has a premium economy offering internationally, and it could simply re-brand the SilkAir premium cabin in that way. Apparently it doesn’t think that’s acceptable, so the airline is going to be putting flat beds on the SilkAir narrowbody fleet.

That refit won’t begin until 2020, and as Australian Business Traveller notes, the actual merger won’t take place until “a sufficient number of aircraft have been fitted with the new cabin products.” So we’re still a ways away.

I think the merger is wise. Why? Well, this will finally bring a narrowbody aircraft back into the Singapore fleet. I believe the last time that happened was when Singapore got rid of a small fleet of 757s just as SilkAir was getting started. Then of course, there was this fleet before that: 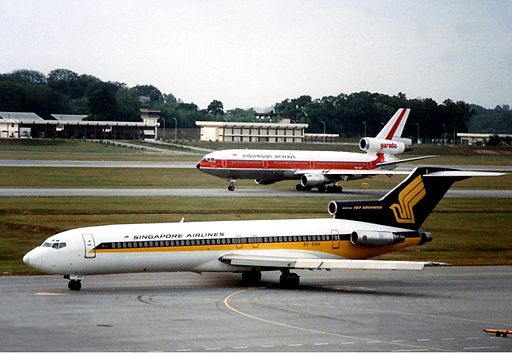 This gives Singapore more flexibility with the routes it serves, though I tend to think the airline is making a mistake by converting its whole fleet to have flat beds. I would think shorter flights would be better off with a more dense configuration similar to what SilkAir offers today. But having a subset of the fleet with flat beds will be useful. On longer haul, especially as the 737 MAX comes into the fleet, this will allow Singapore to serve thinner markets or markets that demand higher frequency that still have premium demand.

For example, Singapore has 3 widebodies a day on the 6+ hour flight from Singapore to Beijing and 2 widebodies a day on the route to Osaka. Maybe it would like to have less capacity, or maybe it wants more frequency without adding too many seats. It could do that with SilkAir today, but it has to sacrifice the premium cabin. With this new configuration, it’ll have options. This should also open up new markets in Asia that Singapore can’t be supported with a widebody today. And these routes should be operated under the Singapore Airlines brand.

I’m glad to see Singapore trying to rationalize its brands, and the SilkAir move seems long overdue. I still remain skeptical about the value of Scoot, but I suppose it’s still better to have one brand to manage on that side than two.

13 comments on “After Diversifying Its Brands, Singapore Reverses Course”

Topic of the Week: Scoot

NBTA: Qantas and Singapore’s Battle of the Suites